Interactive Walk at the The Memorial Bautzner Straße Dresden

The Bautzner Straße Memorial is a former remand prison of the GDR in Dresden. Many of the rooms have been preserved in their original state and visitors can view large parts of the former prison.

The interactive tour is a journey back in time, accompanied by contemporary witnesses. Like every memory, these also have personal perspectives and only reflect part of what has been experienced. The 3D scans of the rooms reflect the incomplete and subjective memory of a memory.
The “human” camera movement offers the virtual visitor a very lively I-am-on-site experience, which redefines the virtual experience of (exhibition) rooms.

Currently the page is only available in german language (text/audio). 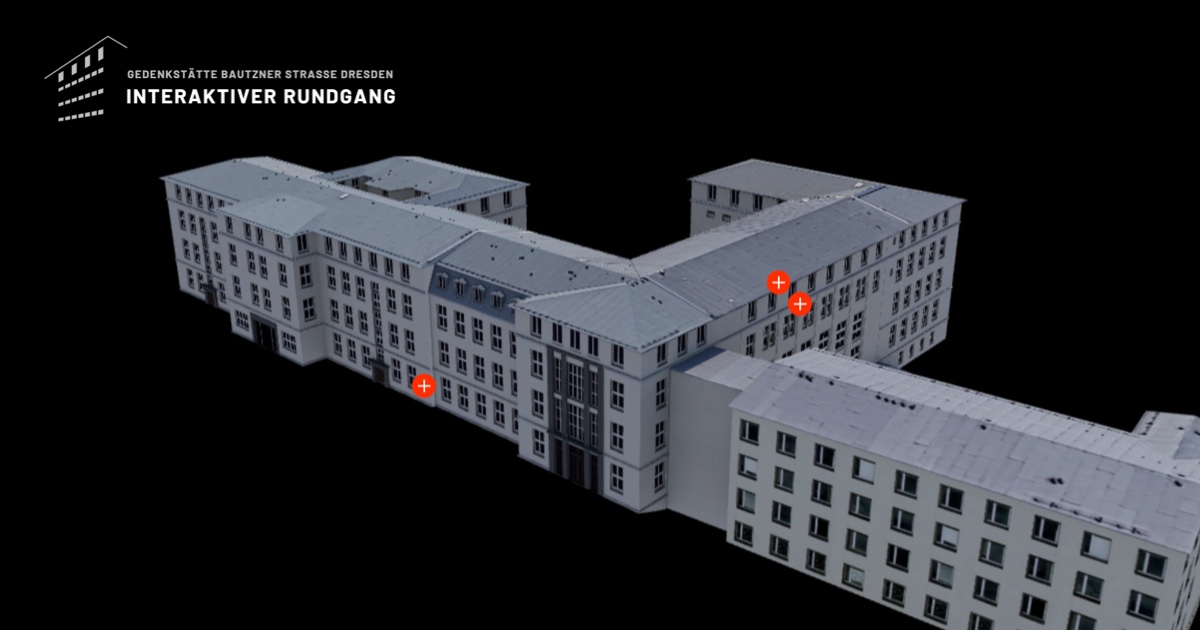 This project includes spotlights, but those have been disabled, cause those didn’t match for the memorial experience. If you are interested, you can visit this link to have spotlights enabled: Interaktiver Rundgang | Gedenkstätte Bautzer Straße Dresden

Being a museologist I liked your approach very much. Incorporating the oral-histories into three.js is a wonderful idea.

Can you comment on what 3D scan tech you have used? I’m currently working on a virtual exhibition about a town square and photogrammetric reconstruction with Meshroom - for a month now, failure after failure, the model either fails or becomes too heavy to work on.

first, thanks for your nice words!

Cause it was for a non commercial organization we had just a small budget for this project and the only option to go 3D was to give the iPhones 12 Pro lidar a try. The first results were a kind of mindblowing. We really didn‘t expect such nice results out of a consumer product.

But – no scanning app was able to deliver high quality 3d scans. Every scan has its incompleteness and mismatching textures and geometries and there was no way to solve it with the iPhone itself.

But – the „feeling“ of all those 3d scans are so close to the real feeling when you be in one of those rooms that we were super happy with the results. They were perfect for what we wanted to achieve.

How did we fix some missing parts (holes)?
We finally used threejs editor itself, by adding simple geometries with textures captured next to the „holes“. It’s a bit like cloning in Photoshop. The great thing about threejs editor was, that it doesn‘t changed the original GLTF file at all. The file keeps mostly the same filesize and is 100% compatible with threejs itself.

Hey Matthias, thank you for sharing your experience on iPhone’s lidar. Until that came out I kept myself away from lidars as they don’t provide texture by design. I saw them much more suited for technical/engineering work. Their prices + SW prices were also a factor of course

They create many blindspots - so does photogrammetry. To get better results you need good setups with no people, special permits to take the shots, go back and take more shots to augment if reconstruction fails etc… Not an easy job at all… Missing/distorted mesh/textures are indeed a problem and fixing them also takes a lot of your time. I have the feeling we are not there yet - technologically.

Alas, most of the smaller museums have little to no budget for such projects, so much of my experimental work is also non-profit, I keep what I learn

Keep up the good work…

J’adore, c’est magnifique !!!
Incompleteness and mismatching textures and geometries gve the sensation or the feeling that i’m in a nightmare, in a dream or in a memory of someone who was here in the past.
Superbe, bravo !!!