When displaying some models on Android Chrome + FF, it displays the shadow/normals back to front … 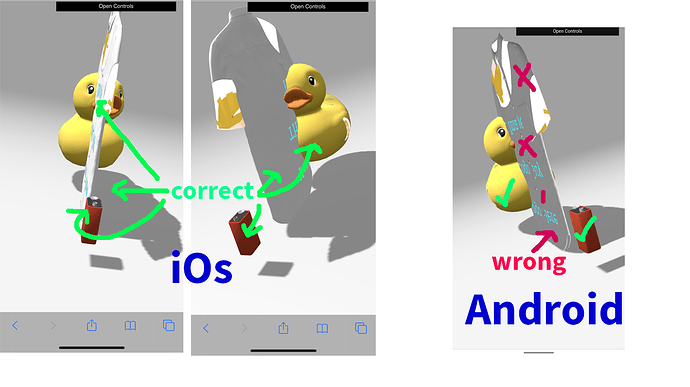 androidproblem1366×768 224 KB
…so a shirt is dark on the front where it’s lit, and light on the back when in shadow. The duck.gltf is showing shadows correctly. They are all GLTF.

I think the problem may be coming from models that were created using Adobe Dimension.

Is there perhaps a way I could edit the file in blender and re-export correctly?
Or is there a version of three that might work - if so, where to find corresponding gltfloader.js etc please.

I’ve tried all sorts of code - including using a copy the three gltf loader example to no avail. It’s not easy for me to quickly share the code but I was hoping someone might be able to help before I have to unpick it.

The model I have is licensed to me, but I suspect it’s the same for any Adobe Dimension file.

where can I find the earlier versions of gltfLoader?

You can always travel back in time by checking out the repository at a specific release. Or you use service like githack which allows to include library files from previous releases like so:

Just replace r105 with the release you want to use. But please make sure that all three.js files you are using in your project are from the same release.

BTW: For investigation purposes, it would be good to know which release introduced the rendering issue on Android.

Thank lots, I didn’t know that. I now have partial success…

I experimented and found that r91 works, and r92 doesn’t. So that’s good, I can use 91. However, it’s not surprising that the model doesn’t look anywhere near as good using 91. I built a small scene for the shirt to show: 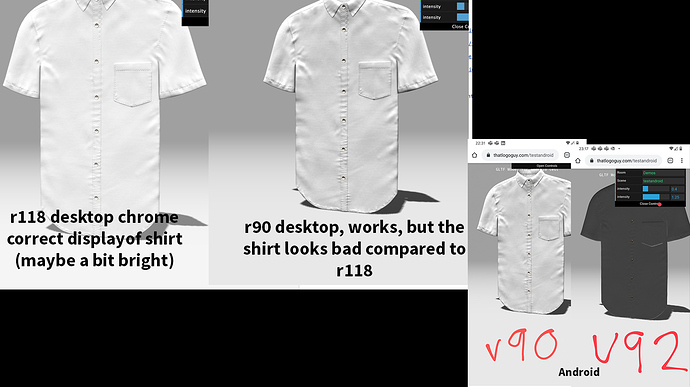 I think I’ll have to stay with 91 then, there aren’t any other hacky things I could try to remedy this?