Not sure if this is similar to this question here:

Hello! I am using gsap to have a tween to the point clicked (on the object). While tweening i set orbitcontrols = false and =true after tween completion. After the completion orbitcontrols is activated automatically (without dragging with the mouse) and it also snaps the direction of the camera to another direction. How can i make it so it doesn’t snap and it doesn’t automatically use oribitcontrols after tween? https://jsfiddle.net/37jkgozd/4/

Basically, I am tweening my camera’s position to lock onto an Object3D mesh. During the tween update, I do this:

At the end of the tween, the origin is basically that object3D I locked onto and the camera rotates around that object3D. How would I set my control’s target back to (0, 0, 0) without having the camera look like it is snapping back to the position before the tween started? I tried doing this but the screen turned all black after I moved my mouse:

I’d like to see a smooth camera movement away (ie: no snapping back into the original pre-tween position) from that target object3D and the rotation point for the OrbitControls to be (0, 0, 0) again. Thank you.

I should add that I could remove the tween updateCallback and the center point will be good, however it still snaps the moment I move the mouse after the tween.

One weird thing I notice is my camera[‘position’] gives the same Vector3 data values during the entire tween in the onUpdate callback when it is clear that the camera is moving.

Will this resolve the all-black issue?

I removed the tween update callback and dropped the controls[‘target’] code so the center of rotation is ok still at the end of the tween. There is just that weird snapping when I move the the PerspectiveCamera. Maybe I need to run some sort of update() function but I tried camera.updateProjectionMatrix() but that did not fix the snapping issue.

To be honest, I’m not sure I understand the issue. If you use a tween to move smoothly the camera target to another object … and you want to move it back to (0,0,0)… that could be done by another tween, couldn’t it? Here is my attempt:

I’m using gsap by the way. Not sure if that matters.

Again, during the onUpdate, my camera[‘position’] console log output remains the same all along even though the camera is clearly panning over to the clicked object. I would have expected the value to change during the updates.

Here is the part of my code that handles the target. You can see, I use a tween both to move to another target and to return to (0,0,0).

I’m trying it with the ThreeJS Tween now. I get the same jumping problem.

Most likely the issue comes from part of the code, that you do not show. I hope that somebody can give you a better suggestion than me.

PS. I’m not sure whether changing directly the camera is good. OrbitControls also changes the camera, and it will overwrite your changes. See in my example, I do not work with the camera, but only with the controls.

Here is a tweenjs example of changing the orbit controls target.
What prevents the jump when the tween finishes in this example, is the controls.update() in the animation loop.
Using tween.js with OrbitControls 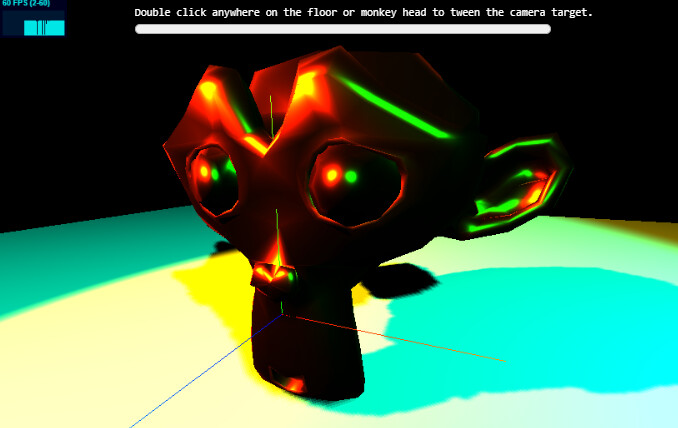 Pres the <> in the working example for the inline vanillajs code using import maps.

I shall give that a try in a bit. Note that there is also no jumping for me if I update the controls.target point to the Object3D point at the end of the tween. But if I decided not to update it, it jumps. I am also tweening the camera.quaternion data/object if that matters at all.

PS. I’m not sure whether changing directly the camera is good. OrbitControls also changes the camera, and it will overwrite your changes. See in my example, I do not work with the camera, but only with the controls.

You may be correct about updating the camera causing problems. I shall do a test and see if that is the cause and find an alternative object to update.

An observation I should mention is that is controls.update() is executed, I revert back to the position pre-tween and tweening the camera.quaternion will not “completely work” (ie: seems to struggle and fight some force to tween and reset back and forth. Could be what Pavel mentionned that OrbitControls updates the camera also…). Again, I am tweening the camera.quaternion object. I may have to put the controls.update() call back into the animation frame callback or the OrbitControls auto rotate will not update correctly. Seems like the tweening of the camera may be the issue. Testing further to be sure.

It’s confirmed, it is the tweening of the camera.quaternion object (or camera) that is the problem.

I changed the tween to this:

What you get after you pick a new point is a jump back to the initial pre-tween location.

There must be a solution to this. Like updating the camera somehow or maybe the controls to reflect the new and final position.

I struggle to image what you are trying to achieve.
Is it anything like one of these examples. They all are all different in some way.

If not, is there something you’ve seen on the internet that shows what you want?

ok, here is the required setup. You have an OrbitControls that will auto rotate. That means you will need controls.update() inside your animate() recursive function.

The goal here is to be able to click a point (or Object3D) and have our camera look at that point. That means that point we clicked will go towards the center of the screen. Important that we are not trying to move towards that point (ie: moving right at that point distance wise). So basically, we will need to play with the angles/quaternion.

Now, for those 3 examples, the first 2 works because the controls.target changes each time we click on one of those numbered points. That is the expected behaviour and that’s what I’m getting also.

The goal here is how do we click on those numbered points in the examples, and our camera look at the point in question like in the example, but then, be able to move our camera away from that point using our original (0, 0, 0) controls.target point of rotation.

What’s thinking of doing is place a code to tell the animate() function to not execute controls.update() while I am tweening my camera.quaternion towards the target point as the OrbitControls will cancel out that tween. At the end, I need to somehow find a way to update my camera so that it does not jump back to the initial pre-tween point when controls.update() is re-enabled. The question here is how. I don’t really want to modify OrbitControls.js as that would make it non-standard. I wonder which part of the update() code contains the original pre-tween rotation/quaternion and needs to be updated…

Is this what you want? Stage a couple of frames with a reflective, blurred out ground.