Refactoring my code into class, but I have one last problem
I’d like to remove the subfunction and transform it into a class method like anything else
but i cant make the render loop work (js error on “this” )

I can’t make it work

Has anyone a tips ? ( neither familiar of js function into function nor like it… : “Keep it simple”)

I’m afraid you have not posted valid JavaScript Syntax.

Why not provide a fiddle with a simple working example. In this way, you can easier show what parts of the code you want to change.

requestAnimationFrame with this keyword

Can we implement render loop within a class using “setAnimationLoop” ? It is more understoodable than requestAnimationFrame, plus it allows to stop beautifully the animation by setAnimationLoop(null).

For some reason I can not bind “this”

Let me clarify first that the fiddle I have posted four years ago is actually not right. The code should be looking like so: Edit fiddle - JSFiddle - Code Playground

The idea is not use an arrow function in animate() since this will create a function on each frame which only produces GC overhead.

Thanks for the information it realy helped !

One hint, in your example you have animate() out of the class. I have corrected my codepen according to your proposal but including the animate() inside the class ( i do not want animate to be shared across my classes) : 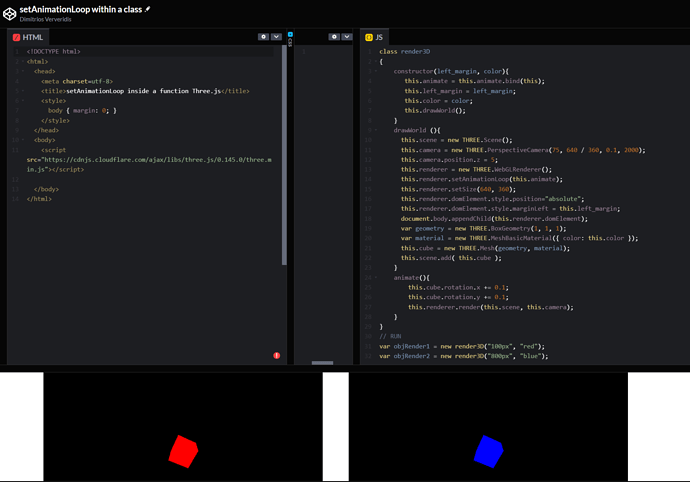 i’m not sure it’s worth it tbh, oop is for data storage containers. to structure an app with that will be an exercise in frustration. you do not get any of the benefits you’re after: separation of concern and re-use. for these two to exist a “unit” needs to be self contained and have awareness of its environment. an oop class has neither: the class needs to sling its exposed methods throughout the code base which creates dependence. and awareness is only possible by injection, at which point it starts to make heavy handed assumptions as to the projects structure which then hampers share and re-use. as such the oop class links into and has to know everything.

there’s a famous quote by joe armstrong describing just that:

after the oop paradigm came fp, and with that the component. a component cannot be adequately modelled with oop. as an example, this is the same as above with a component: Basic demo - CodeSandbox