Hi,
I’m venturing back into familiar-ish territory with using latheBufferGeometry.
I’ve got a rectangle (loaded from an svg) as the source object (shape) for a lathe geometry operation.

My results are as such:
top images are top view, bottom images, underside. 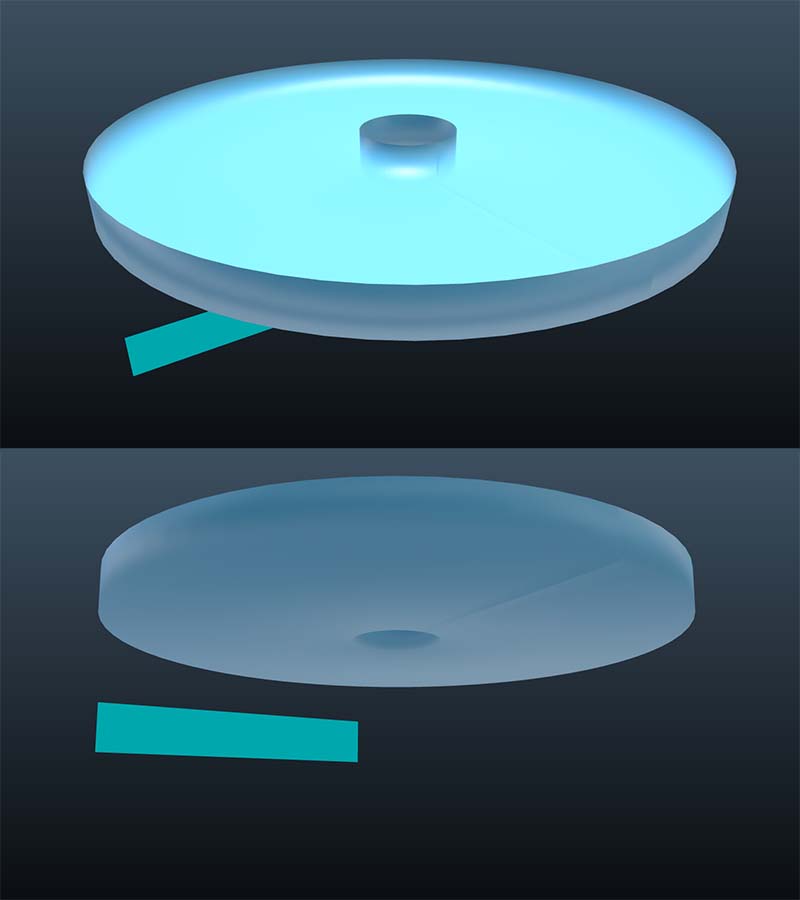 different texture for a different view: 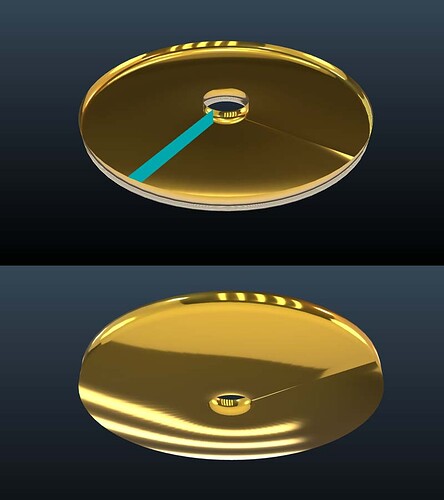 As you can see, I’ve got a nasty seam going down the radius and the outer and inner diameter sides are inverted.

Here is the code that I’m using…

I’m thinking this has something to do with point order (possibly of the loaded svg??)

Any help in getting these little issues resolved would be fantastic!
Thanks!

EDIT: I’ve fixed the faces’ direction issue, however no matter what shape I use, ONE side of the resulting object’s geometry never gets created. This seems to be the biggest issue.

On a general note, issues like yours are easier to analyse if you keep the number of vertices (along a path) and segments for a Lathe low, as high vertex counts and segment counts tend to smooth any errors away.

Also, I recommend using the VertexNormalsHelper() function in debugging such issues:

For r125 and later, it’s useless, as this is a method for Geometry.

After calling this line on LatheGeometry with the full circle, I would try to compute the average normal of the respect points of begin and end, and applied the result to them.

I would try to compute the average normal of the respect points of begin and end, and applied the result to them.

The seam handling as you describe is already built-in in the regular LatheGeometry() code, following Line 103:

There is no such a seam in this solution: Clipping Planes Problem - Radial reveal only half way - #16 by prisoner849
It’s done with shaders, but doable on js side.

no matter what shape I use, ONE side of the resulting object’s geometry never gets created.

Sounds like an “off by one” error. Have you considered the 1st bullet point of my previous answer?

BTW: updating an original post after it has already received answers is likely to go unnoticed.

Hey!, this post is an extension from the project you helped me with back on that post you just linked!
I’m using your shader code along side this lathe operation to produce both the interactive animation of the object revealing radially, AND the finished, seamless (watertight) object.
CAN I actually use your shader to (upon a button click AT completion of 360 reveal,) to produce a solid object without seam and removing the end-caps from the interior?

While i still want to solve this long-time coming problem of ‘lathed geometry from a closed shape (not a curve)’
…if your shader can provide the above, then It’d be all the more efficient.

-Thanks for all the suggestions guys!
Will be experimenting with them.

ie: recording the first entries in the points then replicating them…

this code provides the missing side problem…

I am still interested in removing the seam that still occurs on the material. obviously the points have not merged.

possibly i should also record the firstEntry AND lastentry, then somehow average and combine them…

of course i wouldn’t RE-add the last entry to the point array, but how would I go about taking those two recorded values and average / merge them? This seems to be the final step.

is still relevant after doing so.?

but how would I go about taking those two recorded values and average / merge them?

Be careful not to mix up the closed path (in the points[] array) with the full circle ( 0 to 2 * PI ) lathing “sweep”. The closed path is where you replicated the first point as the last.

The visible seam is happening in the lathing sweep. The averaging of normals is already built in the LatheGeometry() code itself and usually prevents any visible seams. If you want to see how the authors of that piece of code did the averaging: here’s the link for you to study.

On a related note, a “path” as defined in the points[] array is a 2D line structure, which may be closed but doesn’t have to be. I’m a little suspicious of the filled rectangle which keeps appearing in the screenshots you provided.

Does the seam also occur, when you fill the points[] array for testing purposes manually, instead of deriving it from a shape?

I used a set of points that defines a simple rectangle, and got that “seam” in the result: Edit fiddle - JSFiddle - Code Playground 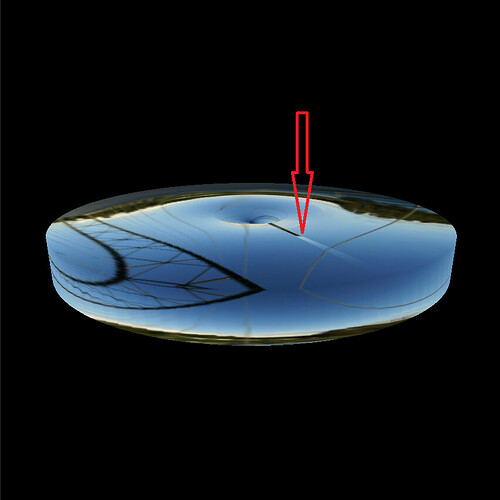 I am not sure if there is a connection.

In some of my geometric constructions, I have had to recalculate the normals at the seam points when the parts meet, because they were different due to the edge position.
I took the average.

Made an example with the same approach of the bending of ExtrudeGeometry, but on js side instead: Edit fiddle - JSFiddle - Code Playground 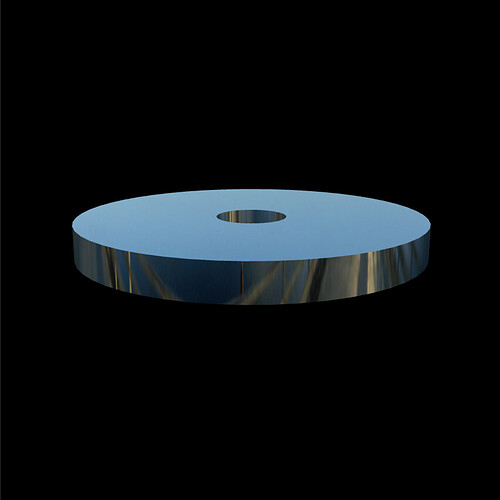 prisoner849, Nice!
I’m going to try that.
Side Question:
Any off hand knowledge of why I’m getting errors when supplying a pre made MeshNodeMaterial for the sides material?
Other material types work fine.

this, from when your example from earlier this year. it’s using (happily,) dat.gui which i have to animate the radial extrusion.

Hofk,
That’s an additional portion of code I’d been dealing with regarding if the profile of the lathe shape was something more complex like a crescent say…
And the sides show a faceting effect.
I had some code that member manthrax on github had kindly dilute supplied, that smoothed the surface, yet it was for Geometry, not bufferGeometry, and hasn’t been able to successfully update it since the new version of three said goodbye to geometry.

I’ll add that to this when back at desktop…
EDIT:
here it is… 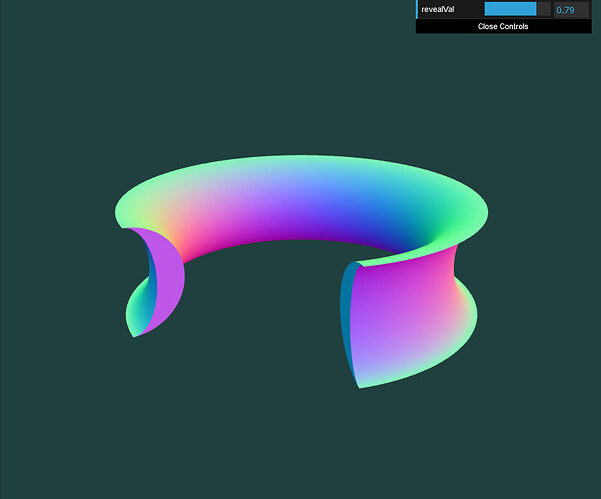 Terribly sorry. I meant meshNODEmaterial I created it in Blender, its essentially an outline material using edge emission, which is a property of a GLTF object is import just to hold the material to input into your shader.