Webxr camera is not at position of perspective camera

My webxr camera is not at position of camera given in three.js perspective camera used in render function !!

but the problem is that camera scene is this:

but after adding that code camera render this:

I guess this is either outside of my mesh

when i go out without VR mode, this is my mesh outside

after changing camera position to somewhere and positioning VR headset in webxr emulator for so many time,

I managed to get this manually

Is there anyway i can have webxr camera at the camera position !!!

You add your camera to a group, then add the group to the scene, and position the group where you want your head to be.
Thats what I do in these two projects

For Ball-VR, it’s a little more complicated.
It’s all in this script: Ball-VR/ball.ts at dbc4c2747842d3ed20942c2013393b276b563754 · Sean-Bradley/Ball-VR · GitHub
The camera is added to a pivot, pivot add to ball, chasecam added to pivot, chasecam positioned offset from pivot, and then it can rotate from an extended viewpoint similar to the official orbit controls.

this is my addcamera function

the now it is rendering as this: 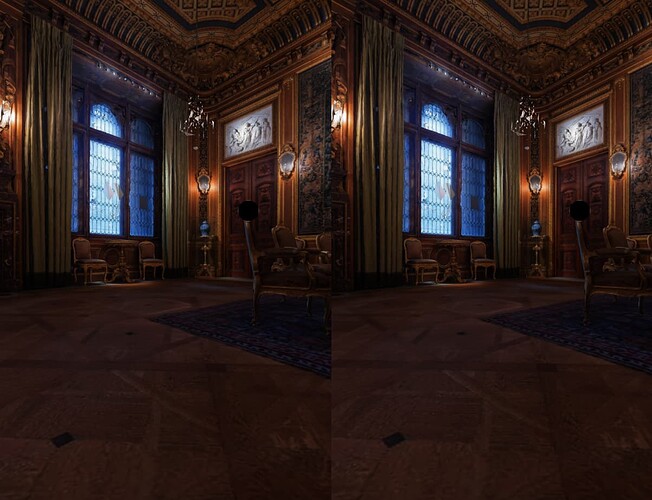 Which is as expected !!

Thank you so much !!

I am feeling kind of lost in webxr because for three.js, I was totally relied in your website but for webxr based on three.js there seems not such resource.

I don’t understand why positioning camera did not work but positioning group with camera as only child worked !!

and one morething, I don’t see my controller now in space which was visible when I was not doing correct, is it expected to be visible ?

from the code, i don’t know if we need it

and positioning the group

i can see this: 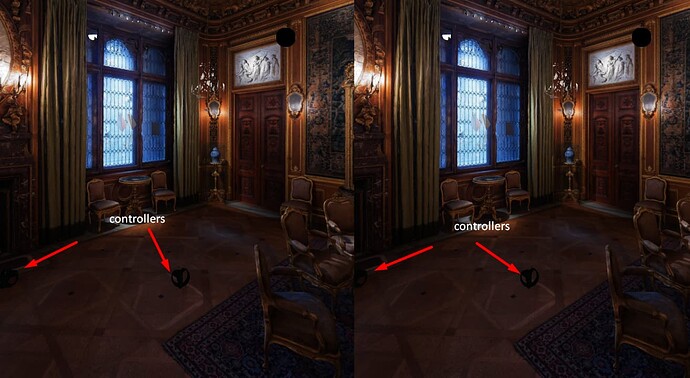 Thank you so muchbut they are not properly aligned !!

I am on webxr emulator,

and controller is far when I move headset back 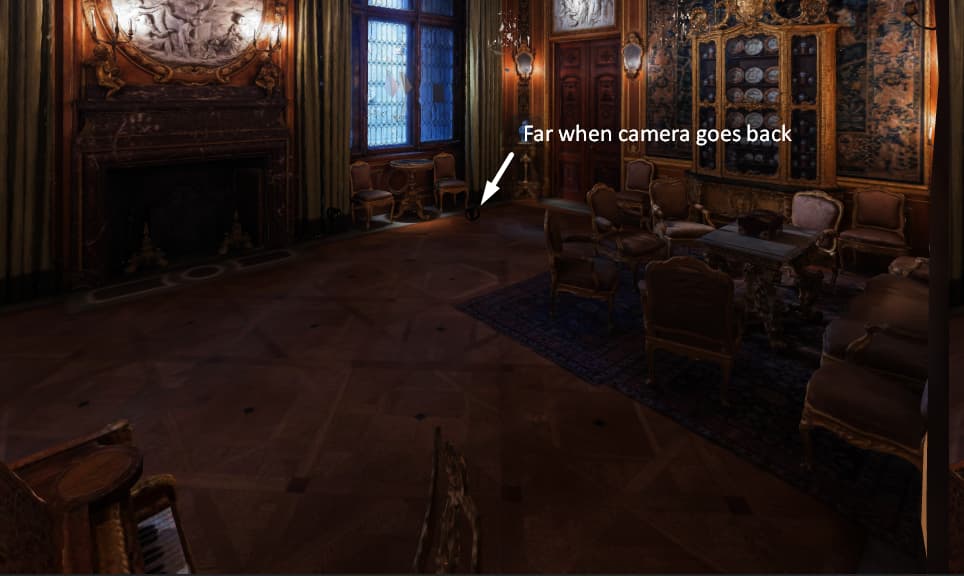 close when I move controller forward

I was totally relied in your website but for webxr based on three.js there seems not such resource.

I have lots or VR resources on my website. Plus Ball-VR. 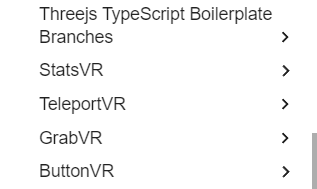 You can reset the coordinates of your headset by long pressing using one of the controller buttons. I can’t remember which one.
Also, the scale of your model is probably not 1 unit = 1 metre. You will need to rescale it using whatever method.
I would rescale it in blender, and estimate based on some real-world measurement, such as the chair height. It would be an estimate and not exactly correct, but close enough for me.

Can i ask why u went with class with vr code ?

Is there any specific reason for this?

I am on webxr emulator,

and controller is far when I move headset back

I’ve been following this conversation with interest! This made me wonder, do you add the controllers to the scene, or to the new ‘camera group’ you just created. Do your controllers get place in the right position if you add them to the group?

When I add the controller and controller grip into the camera group, they position at the same height as the camera and if I add those two into the scene they stay at the original position as in posted pic.

When I drag the camera, they don’t move with it, and most importantly left one is almost hidden !!!

this is my controller code:

So user is the

Just FYI, I had similar issues the first time that I tried using webXR, inlcuding camera positioning, getting the controllers in the right place etc. I was able to solve all those problems by shifting the world 0,0,0 coordinates to where I wanted the user to start when beginning a webxr session ( by shifting the model). The only problem I still have is that the VR view starts at 90 deg to the initial camera view.

I’m keen to know if you are able to solve all these problems though, I think it’s probably worth the effort.

how do you make the controller follow the camera?
Am I supposed to add a controller to the camera group or in scene?

and do you have an idea or thinking of why does it work when we add a camera to the group but not when the camera is directly added to the scene?

how do you make the controller follow the camera?
Am I supposed to add a controller to the camera group or in scene?

I had some issues when I played with offsetting by attaching the camera to a group, so now I just add the controllers to the scene, and the camera is unattached. However the suggestions from others in the forum might solve these issues. Have you tried testing the code with an actual headset?

and do you have an idea or thinking of why does it work when we add a camera to the group but not when the camera is directly added to the scene?

I’m guessing that by ‘it work’ you mean that you get the same position as the camera in and out of VR? I believe the reason is that the VR camera(s) are positioned at 0,0,0 when you start the sessions and in your group example the camera outside VR is also at 0,0,0 in the group space.

No I dont have VR headset

No In my case,

I am outside the house at bottom of house in non-vr mode. 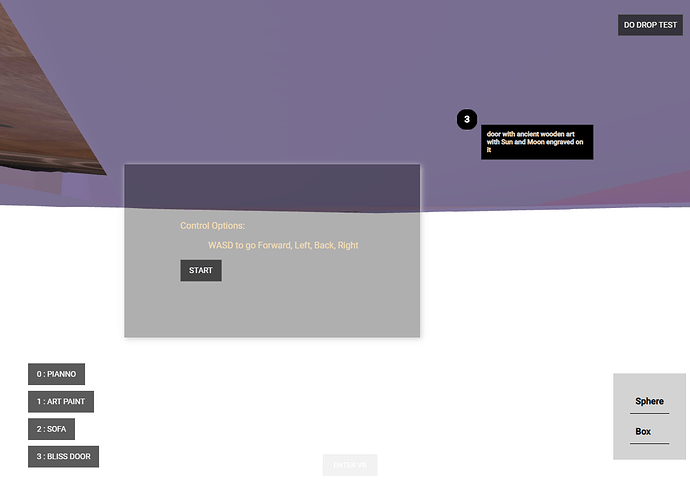 But when i click enter VR, i get inside house in this position

I meant “that worked” mean it was outside but now its inside !!!

I have no clue why this is working

I found this in your code

but when I put these inside the connected event, the controller model is not rendered !!

user is the group where I am putting camera inside it !!!

i wanted to ask this question to get more idea if I am rendering it right or not !!

This is my code in animate function:

and I have this for animation loop

I am sorry, I am not sure about my code so i am asking

this is my update

I added this ray in the controller and this target sprite at end of the ray !! 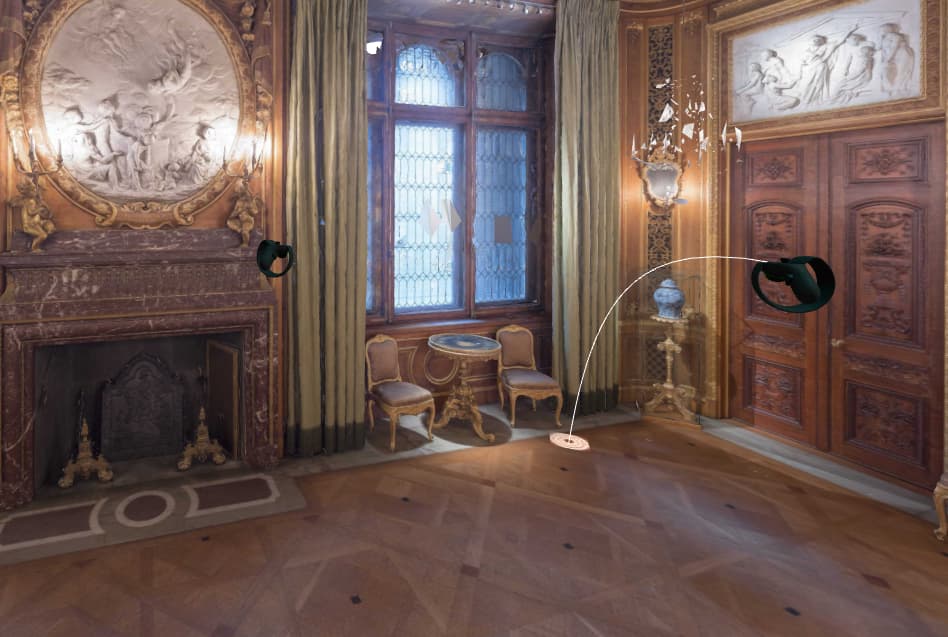 @jrjdavidson I fell into the same problem again !!

can you please help me with this !!

My only advice is what has already been said here before: make sure that your model is at a roughly metre scale( I.e.: 1 unit in your scene is 1m) and that your origin is where you want to start in VR mode. It just makes all the rest easier.

I resized the room with this

and on gltf model load, after traversing is finished, i do this

If it was me, I would set the scale and origin up the scene in something like blender before importing to threejs