Sprite Object Position in between 2 points 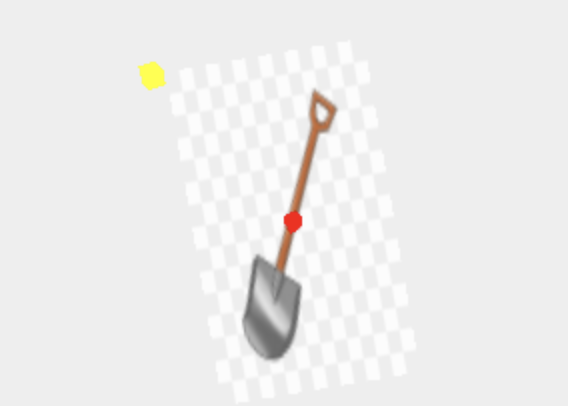 Hi, I am new to ThreeJS. I am looking for a solution for a long time, didn’t find out any, so posting here. Basically I have two points in my scene, marking yellow and red and I have a sprite object. I can place the Sprite Object at any given point (either red or yellow). But I need to place/position my sprite object in such a way the its one end is at yellow point and another end is at red point. Now both of the points are dynamically updating continuously in animation loop. So when I set my camera to look at the red point is is always at the center of the screen, and yellow point moves around. Similarly if I look at yellow point, the red point moves around. Now I need to place one end of my sprite either at red or yellow point and rotate the sprite in such a way that its other end meets at yellow point. How can I do that? The distance between red and yellow point is not also same always, so I need to adjust the size of my sprite as well to meet the other point.

You have to be more specific as to what you call “the end” of a sprite, the sprite is a rectangle.

hi @tfoller thanks for your reply. As to the given image, I want to position my shovel handle at red, and shovel head top edge at yellow. I have already modified my image in such a way that the shovel handle is the center of the image, so whenever i put the sprite in the scene, the shovel handle is at the red position. Now I just want to position my shovel top edge to the yellow point.
N.B. I have created the sprite texture with TextureLoader with a svg image and changed its viewport so the handle of the shovel is now at the red point.
Thank you

Hi @tfoller Thank you so much for your help. I do believe it works just fine and needed very much. Though I don’t understand most of the part, I am trying to understand what you actually did, so that I can bit modify on my own. But thank you so much.

No problem, it’s mostly solved by projecting points into NDC space and back into World, so you probably want to look into these aspects.

My Solution: I have thought of a solution for that. I will not change the sprite center rather what if I double the size of the image (sprite) so that one edge of the image is at the center of the image and I position the sprite at one known point. But in that case the scaling and rotation you have calculated will not work I guess. Any idea? 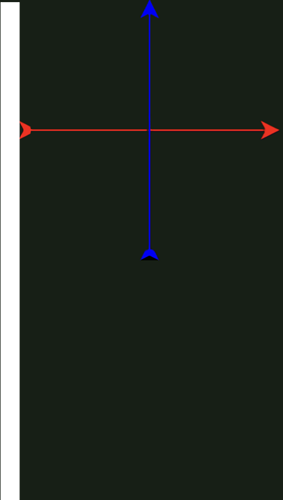 I’m not sure what you’re trying to achieve.

The number 0.5 in this line of code controls the middle point, you can change it in a range from 0 to 1 and see what happens:

rotation should always align one axis of the image with the direction connecting two points.

the only reference scale is the distance between the two points in NDC space, you can change it if you have any other measure, like make it twice smaller for example:

Hi, thank you for your time and help. I will look and play with the points you mentioned.

Hi, sorry for bothering again. I have a simple inquiry. I have seen you are projecting the points, and finding the points difference after that. Can it creates parallax error? Can we do the same without projecting the points? The reason I am asking it because, I have the coordinates of the points in world coordinates upto 10/12 decimal places. So when I get the difference between the points in WCS it is +/ 0.001 error at a given time. But When I use it in NDC, the distance error is upto ± 0.2. So what happens is that, as I am scaling the object in respect to this distance measurement, so with ± 0.2 difference between two points is looks much, I mean I can visually see that my object is getting compressed/squeezed, and again getting bigger. But which should not be, as the height pf the sprite is constant(in reality, though in animation WCS it might have ±0.001 updown) 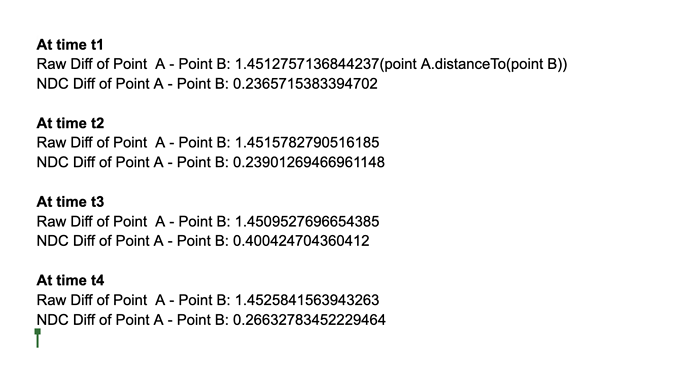 image1360×734 44.8 KB
See this sample data for reference. The difference of the points doesn’t change that much in World space, but it changes weirdly in NDC space.

You should probably make a different question about precision loss when projecting points to NDC space, since it’s not specific to this task, that has been solved.

Okay, better…thank you so much by the way.

Can you please let me know how these first 3 lines work? And what is the purpose of these lines? And also why are we multiplying the x axis with the canvas ratio? Or how can i visualize all these vectors, so that understand myself.

Hi @tfoller thank yoy so much. The issue was resolved. I have a question similar to this. Will it also work for a 3D model instead of sprite? I have a 3D model loaded using GLTF loader. Instead of sprite I want this 3D model to be placed between these two points and rotate accordingly.

You need to open a separate question for this.

The short answer is no, it’s not going to work. Sprites are 2D rectangular shapes that are always parallel to the camera’s near plane, 3D models are nothing alike in this sense.

You need to write a different code if you want two custom points on the surface of your model to match your points A and B (via proper scaling and rotation of the model).