Rotate a plane in 2 axis 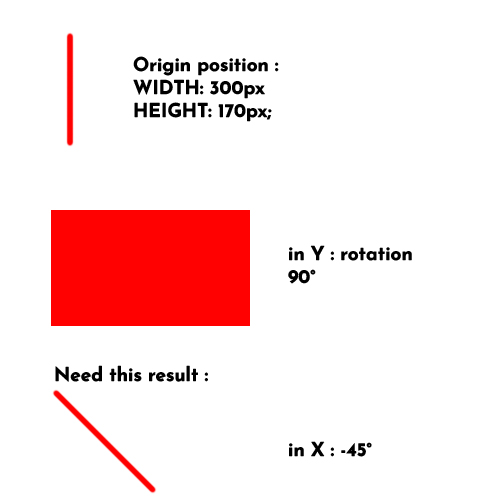 Hello, how to make a rotation of my plane in Y and X to have a straight object horizontally and tilted at 45°

it spins me weirdly sideways

Thanks in advance for any help or suggestion

Is this what you are trying to achieve

Here is a good tutorial about 3D rotations, Describing rotation in 3d with a vector, next step Gimbal lock then good luck with the quaternion (4D rotation)

Add this to your code so you could see axes:

Red axis is X, green is Y and blue is Z.

it’s a mix of the 2: a little tilted and a little crooked on the 2 axes … I don’t understand what changes in your code

but yes, I would like to have the proposed result as in the fiddle

by default I have to make a rotation of 90° so that my plane is displayed in front of the camera. Then make a tilt of -45 to be able to adjust it to a laptop mesh where the screen is tilted slightly backwards

I don’t know why I was stubborn about X and Y but yes: Y and Z and it works

Thanks again ! & a happy new Year

which is weird: I have to put the code in this order: rotateZ then rotateY for it to work, otherwise not

I don’t know why I was stubborn about X and Y but yes: Y and Z and it works

As I mentioned before - use AxesHelper, it helps, pun intended

which is weird: I have to put the code in this order

Yaw Pitch and Roll is not an orthogonal system, like Cartesian, so order of operations matters.

this is my first big ThreeJs project, I didn’t know that the order of declaration of the axes mattered so much… anyway thanks for the help