I’m not sure what I am doing wrong. I am trying to load a glft in react-three-fibre with TypeScript. But I am unable to load the model and only get a vague error message.

it should be dead simple, but I don’t get it 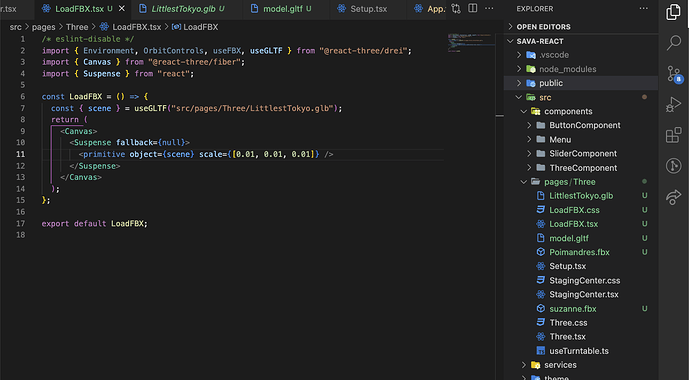 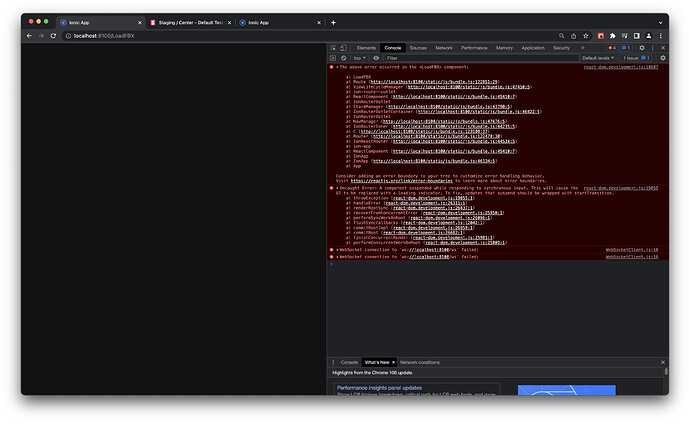 What is useFBX doing in this example?

Also, I saw from some similar problems posted that dated library versions could be culprit.
Not sure if this is helpful, but the working example simply uses:

@notchris thanks for trying to help! Really appreciate it!

What is useFBX doing in this example?

I’ve tried to import an FBX Model but it failed too. I’ve just forgot to remove the import.

Also, I saw from some similar problems posted that dated library versions could be culprit.

I think it can also be due to Ionic. I’ve read in the error message some problems IonRouterOutlet. I’ve also read in this blog post Ionic-react - so many render issues related to routing - Ionic React - Ionic Forum that Ionic is not good at handling react and renderin

Can you trace the error in the dev tools and see what line in particular in which module is throwing the error?

I’ve traced it back to Ionic. I’ve tested a setup with a clean react project using this Getting Started | Create React App and the same code from above worked without a problem.

So, I conclude for myself, it is not an issue of react-three-fibre and TypeScript but an Ionic with React issue. I might have to rethink my strategy and switch to a pure React project instead of using Ionic with React.

But thanks for your help @notchris !

maybe for have figured out already but for sure this is not a path. “src” does not exist, it is virtual. the bundler will take all these folders and files and create a bundle, a single file, from it. browser url fetching something from “src/…” hence doesn’t compute. this is not react or three, it goes for bundling in general.