Need a spaceship from Dune called "heighliner" in threejs

Hi
I’m looking for the best way to create a beautiful heighliner (see images) in threejs. I’ve been thinking about a cylinder within a cylinder but I’m lost on textures.

Does anyone have a decent solution? 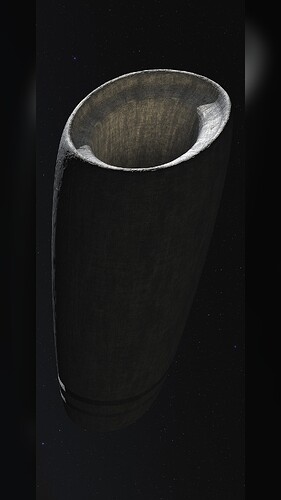 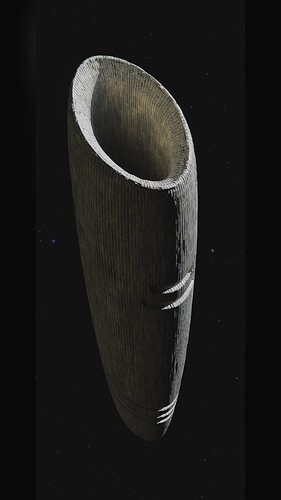 You could start with LatheGeometry to make the shape, then manually add notches in the middle and squash/shear it.

As to the texture, a similar pattern could be created procedurally in the shader code.

I doubt it’s gonna be as beautiful though, you will get better results if you sculpt the shape in Blender and make your own texture in Photoshop. This will definitely benefit from artistic control.

why would you even consider creating that in threejs? this is a clearcut case for blender if there ever was one.

in order to texture something you need to uv-unwrap and then fit the textures, that is a manual process. the time it takes you to learn how to make and texture that shape won’t be that much.

why would you even consider creating that in threejs?

It’s harder and longer, of course, but gives more fun (spent about an hour for that scene)

You could start with LatheGeometry

My first thought was exactly about that geometry, but then I turned to extrusion. There are just two curves (profile and contour) 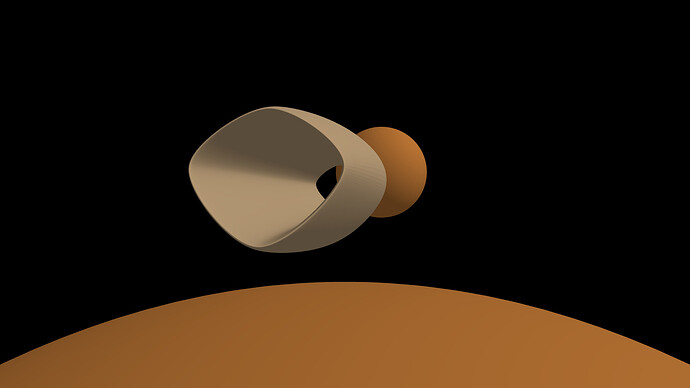 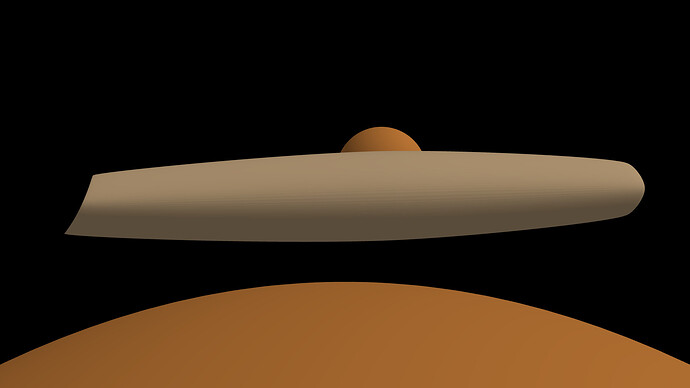 not so bad actually

how’d you texture it though?

Ok, I’m cheating because I used my code to turn Bezier curves from Flash to THREE, but here is a quick take on it using Lathe geometry: 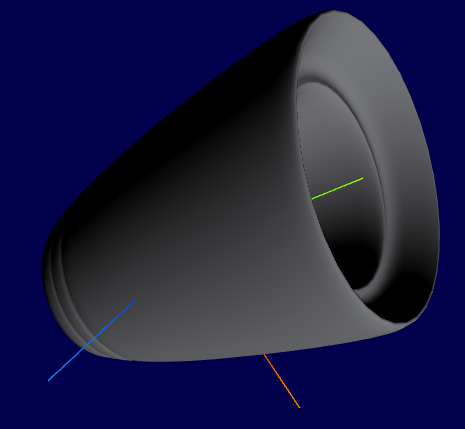 how’d you texture it though?

By computing new UVs in shader, I guess 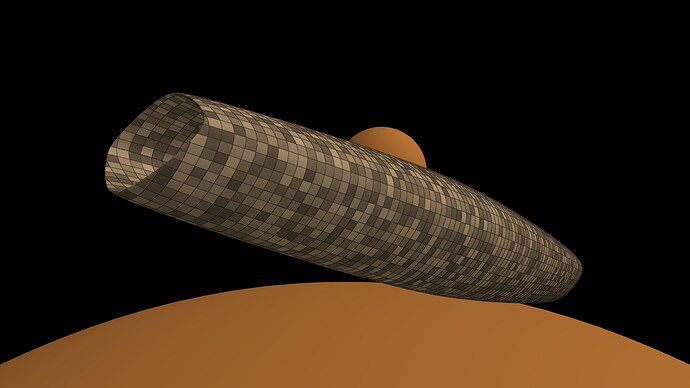 getting close, well if anybody can do it with just basic shapes and code it it’s you.

Holy moly, this is so beautiful and what a champ to take on this challenge head on.
Are you available to comission work? I kind of want to pursue this to the end. 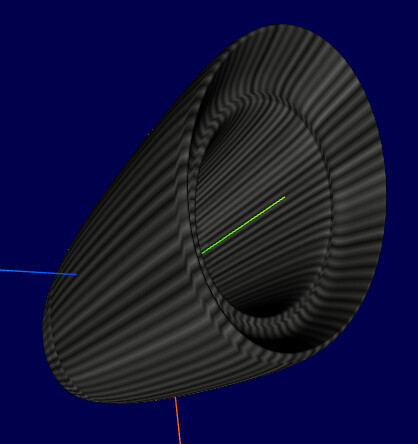 @Bunnynomics_NomNom I would recommend to take @tfoller 's approach, with LatheGeometry, as it’s easier to manage.
By the way, why do you want it to be build with three.js? If your model doesn’t need to be dynamic, then @drcmda 's advice is also an option, to build the model in Blender.

@prisoner849 I thought the performance would be better in vanilla threejs but I want to get as close to conceptional images as possible. Also, the model needs to be dynamic.

The reason for threejs is the ability to do custom vertex and fragment shaders. Is this possible with LatheGeometry by @tfoller? I think using anything else than threejs would restrict us too much in terms of creativity down the road.

Nothing stands on the way between you and .onBeforeCompile(), to modify exising materials to your need

Ok but how would I texture it with LatheGeometry?

Anyone up for this assignment? The LatheGeometry is ok but unwrapping uv map and creating texture to mimic the heighliner seems too steep for my skills.
@tfoller @drcmda Can you email me at: bunnynomics101@gmail.com

I thought the performance would be better in vanilla threejs

The performance will depend mostly on the amount of geometry you want to use to make the shape (it doesn’t matter if it’s made in Blender or procedurally in THREE), and the size of the texture.

As I said in my first reply, if you’re after a high quality replica, you will get better results asking an artist in Blender community.

Making the ship from Lathe is a fun challenge but I don’t see any actual advantage in creating a procedural shape/texture in this case.

If you want to hire someone here, there is job section on the forum, where you can describe your project, state the budget, deadline etc.

Not sure what you mean by the model being “dynamic”.

@tfoller Thanks for the response. I see your points.

Inspired with the topic, made this 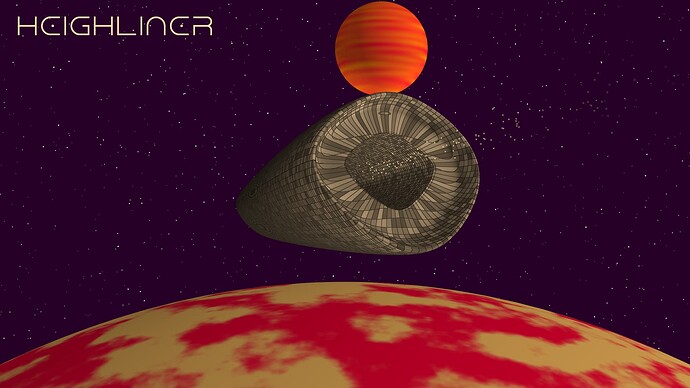 Nice thread, I started to model Chris Foss’s “Guild Tug” from the original Jodorowsky’s Dune a while ago and this has reignited some inspiration to push a finish on it… 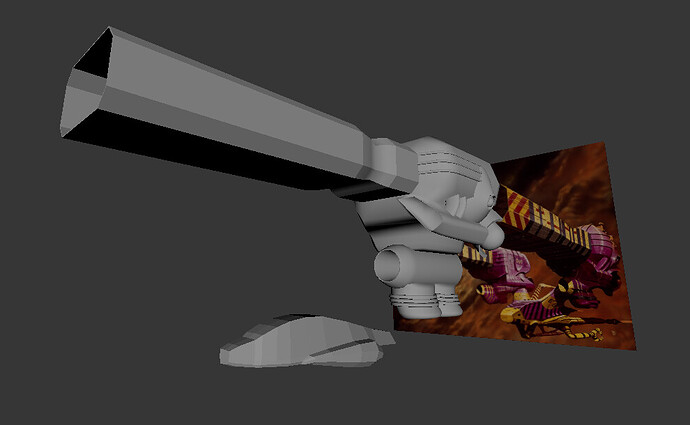 There’s a really great documentary on the original concept film, Jodorowsky is a genius, he managed to pool some of the greatest artists of the time (even now) including Giger and Salvador Dali…

everyones input on this thread has been top class! @prisoner849 lovely demo!