How expensive is raycasting?

Are there any general guidelines for raycasting? How many is too expensive for one update loop?

This expensive, if you’d want exact answer.
As for general guides - as few as possible? The exact amount depends on devices / performance you aim for, so there’s no one number - just use as many as you’d need, and if it’s too much, optimise.

I would qualify this, raycasting is not very expensive, but only if you’re willing to make it so. The default three.js implementation is O(n) complex, with n being number of faces in the mesh. You can get it down to O(log(n)) via a spatial index though, which suddenly makes it almost free.

I often run a 100 or so raycasts per frame with no noticeable performance impact. So the answer is - it depends.

To keep it cheap, try to ensure the bounding box (or sphere) checks are as effective as possible. Raycasting into a single large world mesh with 100K vertices will be expensive, if the ray always intersects the mesh somewhere. Raycasting against 100 meshes with 1K vertices each would be much cheaper, because most of the meshes will be eliminated with a simple bounding box check.

Could you go into the spatial index thing a bit more? Is it like a lookup table in a static scene?

Not quite, it is that too, but more.

A spatial database is a database that is optimized for storing and querying data that represents objects defined in a geometric space. Most spatial databases allow the representation of simple geometric objects such as points, lines and polygons. Some spatial databases handle more complex structures such as 3D objects, topological coverages, linear networks, and TINs. While typical databases have developed to manage various numeric and character types of data, such databases require additional f...

here’s the most common type: An octree is a tree data structure in which each internal node has exactly eight children. Octrees are most often used to partition a three-dimensional space by recursively subdividing it into eight octants. Octrees are the three-dimensional analog of quadtrees. The name is formed from oct + tree, but note that it is normally written "octree" with only one "t". Octrees are often used in 3D graphics and 3D game engines. Each node in an octree subdivides the space it represents into eight octants....

If you ever played a game with more than a handful number of objects - you probably witnessed a spatial index being used.

How can you tell where the user clicks in a top-down game? Well, if it’s a flat-plane game - that’s easy, but if there is any kind of verticality in the level - it requires ray-casting against level geometry, which can be quite large.

Have you seen how in most modern games character’s feet don’t penetrate the ground and align to the surface? That requires at least 1 ray-cast per foot to achieve, typically 2. Ray-casting is everywhere, and if it was done in a naive way in production - it would not meet the performance budgets of many games. As such, spatial indices are part of most rendering engines as well as most game engines.

When you come to the world of physics - spatial index becomes not only “nice”, but essential, without a spatial index you would basically have to check if each object interacts with each other object in the scene, that would become impractical very quickly and you would have to say goodbye to any kind of simulation with more than 50 objects in it or so.

Special abilities in many games are implemented using spatial queries, like “damage in square zone over here” or “apply effect to characters in a cone over there”. When you have lots of characters and lots of abilities being used - you want to quickly figure out which ones are affected. Same kind of story.

thanks for your answers. my head explode now.

Could you go into the spatial index thing a bit more?

An octree can be used to create a spatial index. There are similar techniques like kd trees - the spatial index article on wiki lists a few more variants.

There’s also bounding volume hierarchy (BVH) which is similar to octree. I think the main difference is that you can choose the number of branches at each level and in BVH the final boxes don’t overlap, while with octree they can. Also, the boxes in a BVH are different sizes, while an octree they are fixed sizes. This means a BVH will probably be more efficient for dividing up complex geometry. However, I’ve seen people recommend using an octree to divide up large scenes consisting of lots of geometry - say, a solar system, and a quadtree for large mostly 2D scenes like an isometric game level. I don’t have enough experience to comment on that, however.

This article goes into the difference between BVH/octree. You can see from the screenshots that BVH ends up with fewer final boxes. 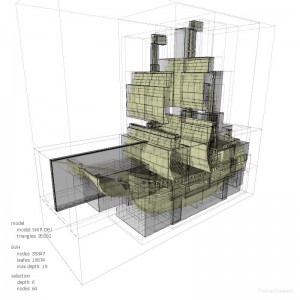 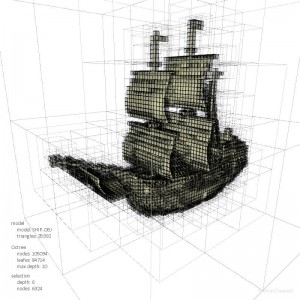 @gkjohnson has a BVH implementation here:

A BVH implementation to speed up raycasting against three.js meshes. - gkjohnson/three-mesh-bvh

I’m not aware of a good octree implementation. There used to be one on the repo but it got removed a few months back due to being unmaintained.

That’s an interesting article. I don’t suggest to anyone trying to get a spatial index working in their project to read it though. It will likely not answer questions that you have and only make the matter more complex in your mind.

Spatial indices are different, their differences are a lot more complex than this. The implications of choosing one over another also depend largely on your implementation. There is a way to implement octree with 0 overlap, there is a way to implement BVH with a ton of overlap. There are ways to use more memory, ways to use less, ways to build the tree fast, ways to build the tree well. There are just too many variables.

At the end though, if you’re not building a rendering engine - it doesn’t matter. You will see that perhaps instead of taking 10 microseconds on a particular query, your implementation takes 11 microseconds. If you started with 500000 microseconds initially, do you care? The answer should be “no”.

This is my recommendation as someone who has travelled this path - don’t worry about it, pick something with least amount of pain to include into your project. Chances are - you will be completely satisfied with it.

thanks for taking that much time, makes perfekt sense now!

If anyone is looking for a BVH implementation for three.js, there’s one in most raytracing libraries like https://github.com/hoverinc/ray-tracing-renderer or https://github.com/erichlof/THREE.js-PathTracing-Renderer
I personally use ammo.js for raycasting as the physics engine has a spatial index already.

Raycasting against 100 meshes with 1K vertices each would be much cheaper, because most of the meshes will be eliminated with a simple bounding box check.

Working with earth representation, I confirm raycasting takes about 1 second for a 1440 x 1440 spherebuffer geometry, this 1440 geometry being not even enough to get very precise position of a place on earth. (building such geometry also takes 0,5 to 1 sec). So I am also searching for a workaround to this issue. Like, for example, dividing the sphere into dozens of sub-spheres of 4 vertices per degree (1440 corresponds to 4 * 360) and then raycastng subsphere. I had to do this division because of the texture tiles : three cannot tile sub-textures on a sphere.

Raycasting is not the right solution for that — if the object’s bounding box crosses the ray at all, then a Raycaster will loop over every triangle in the mesh. If you want to know where a ray intersects a sphere, it will be much faster to use Ray.intersectSphere to get the intersection coordinates.

If you need a specific triangle, rather than specific coordinates, then you’ll probably need some kind of spatial data structure instead of raycasting.

If you want to know where a ray intersects a sphere, it will be much faster to use Ray.intersectSphere

Thanks, it looks very fine, so I tried it the following way
What worked fine but slowly (mouse is normalized, camera is orthographic, earth is the big mesh of 1440x1440 vertices ) :

For more complete information, how main objects were built :

So now, do you have a clue about the reason why this ray.intersectSphere pushes nan in point2 while its parent raycaster returns good values intersecting with the mesh earth ?

You may need to double-check the documentation for intersectSphere. It returns a single Vector3 for the intersection point (or null if no intersection is found), and not an intersects array as the Raycaster would do.

Well the syntax was correct, I just did not create the sphere correctly (debug shown a radius of -1 etc)

I have to become a bracket lover or hater …

Now it works perfectly with even better precision. Your help will make me progress to a much faster system : no more need to create a triangles geometry of 1440*1440, I’ll separate for always the sowh part (meshs) and the calculation part (maths).

I have to become a bracket lover or hater

Realize that “brackets” result in a new object being created every time you call that constructor function, thus it’s extra garbage for you garbage collector which will come to collect and cause an FPS hickup at some point down the line. Not using “brackets” for potentially performance critical parts of the library and for that matter any code you write is just smart choice. Nothing to do with syntax preference here.

Hope that helps. Also, documentation should be your first place to check, then the source code on github and debugger. Sadly we’re not at the point where you can write “drAw pReTtY piCtUrE pLx” and see the library produce expected result.

That said, a lot of the points in this discussion seem to go off-track. If you want cheap ray-casting, you should probably invest into a spatial index, this would simplify your user-side code significantly. Trying to mess with sphere here, or breaking your models into 1000 pieces manually is equivalent of using a text file instead of a database, reading it line-by-line instead of using any of the numerous SQL and other types of databases on the market. You’re just inviting bugs and headache, and in the end your solution is probably going to be inferior in terms of performance too.

I have advocated for having spatial index inside three.js in the past, at this point I don’t really care, since there are clear drawbacks to doing that as well as obvious benefits. In my engine I use spatial indices extensively and the projects I work on would be frankly impossible without that.

On the subject of bounding spheres, I would note that bounding spheres in three.js are severely overestimated, bounding sphere is computed from bounding box, which guarantees that the sphere will be an overestimation except the case where your geometry is literally an axis-aligned box. I use an alternative mechanism for computing bounding spheres that results in spheres with roughly 50% or smaller volume compared to those created with three.js.