For the longest time I have been using the default floor that came with the example I used as a starting point, a simple checkerboard used in “repeat” mode (see screenshot).

Now I’m hoping to do something at least markedly better, but I don’t have a lot of time so it has to be fast and easy to implement.

Note: as I said in another thread, I love HDRI images but I always have the same problems with them:

So I prefer even something as simple as just a better graphic but I’ll take anything that makes the world look better than it does now. Ideas?

Here is the current code I have that creates the floor using the checkerboard graphic: 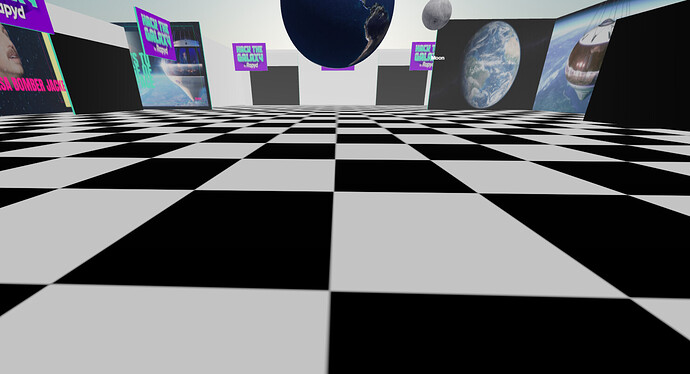 you can bend hdri’s around, it’s called floor projection, the problem you noticed when shifting the view around goes away. makes for some interesting scenes. i believe the implementation you see in the sandboxes below is being merged into threejs, and if not you find the full code here: GitHub - pmndrs/drei: 🥉 useful helpers for react-three-fiber

there’s also the possibility to render the environment instead of just displaying a hdri. resolution in that case is up to you and you can present whatever you want.

another thing you could add is reflections. everything looks better if it reflects: SSR Test - CodeSandbox the library for that is called “screen-space-reflections” on github/npm.

How about something simple? What do you think of this?