Guys, I need you to help me please!

I have a globe (three-globe) at the center of my scene, a perspective camera that sits slightly above the horizon (and is tilted slightly down) pointing at the globe at the center of the scene, and an orbit controller.

How can I calculate the point that the camera moves to this point, which is on the globe?

I have tried to visualize the above once again. The small red dot represents the known location on the globe and the end point of the example. W and H are constant distances over the rotation.

(And here is the perspective from camera view)

If you are interested in what I have done so far. This is what the project looks like up to this point. 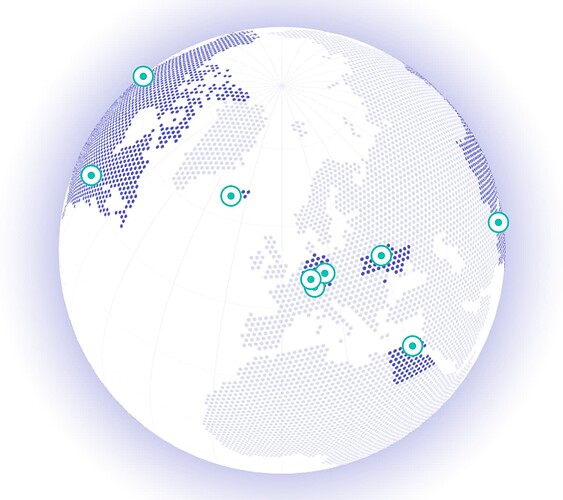 Hey there, fellow globe designer here - my focus has been on making a realistic globe as seen from space (NASA maps with vegatation based on month, altitudes / terrain, specular water, animated clouds on an hourly basis, realistic atmosphere, night lights, meridians and parallels as well as borders at the ground level following terrain, globe rotation based on subsolar point and actual or simulated time, etc). It’s nice to work on this, irrespective if it’s a business interest or just for fun … but I also know where you took the lat / long lines code from, haha! Don’t worry, I’ve been checking out the same code, though I believe I came up with a better version.

Now, on your question, there are several issues from my point of view.

First, your axes / rotation description doesn’t quite match the Three.js ones (unless you already rotated the globe to fit your way of approaching this, that is, but it doesn’t seem so from your code). This is because in your preview, the rotation is actually done around the Y (bottom to top, i.e. pole to pole in Earth terms) axis, and not around the Z (far to near, passing through the equator) axis, with the rotation around the X axis (left to right) uninvolved here.

Secondly, you didn’t post the Globe.getCoords() function, so I’ll assume you have the right code to get the world (X, Y, Z) coordinates on the globe from latitude and longitude - if not, you can check this SO question and see if they work. If they don’t (I don’t use them, but I remmeber I tried them and there were some swapped things here and there), you can use mine:

Next, once you have the position on the globe as an (X, Y, Z) vector, you can calculate where the camera should arrive using simple math. As per your preview, I’ll assume the rotation is done around the Y (and not Z) axis, so feel free to swap things if you insist it’s the Z one

- the Y in your preview stays constant as the height at which you rotate, so only X and Z (from the horizontal plane) change. According to basic trigonometry, the (X, Z) coordinates on the globe in that plane are (R * cos(rotationangle), R * sin(rotationangle)) where R is the radius of your globe.

Finally, since cos(arccos(x)) = x and likewise for its sin() counterpart, it’s just a proportional system:
Final Camera Coordinates = (D * X / R, yourcameraheight, D * Z / R) [4]
where D = camera to globe center distance, R = globe radius, X and Z = the 1st and the 3rd components of the vector given by the above function, aka the X and Z coordinates on the globe.

As for the path to get there, it’s just an arc on the circle with the radius D, you can calculate each point along that arc using [1], assuming you know the start and end rotation angles of the camera. That is easy to do since you probably know the initial rotation angle, which you can increment in radians each time you rotate the camera, or, if other independent rotations mess up with that, using either [2] or [3].

This could have probably be done in a more compact fashion using Three.js functions, but personally I don’t dig much into quaternions, rotation matrices and all that technobabble, the math I have to know to deal with common things like that is enough for me and I’m guessing for 90% of Three.js users (bar the veterans who eat such high level stuff as breakfast)…