The game engine I am building uses a large number of graphic resources: textures, materials, buffers and so on. Many of these resources are shared, because we want to avoid loading the same texture or resource twice. So for example the noise texture used in animating the ocean waves is also used to interpolate between cobblestones and grass in the terrain shader. Having each of those shaders load the texture separately would mean using twice the GPU memory.

In order to avoid an architectural nightmare where every shader has to be aware of the lifetime and ownership needs of all the other shaders, I have implemented a caching and reference counting system. For textures, there is a TextureCache class that uses the lru-cache npm package. The entries in the cache are little wrapper objects - I call them TextureRefs - which hold a reference to the resource as well as a reference count. When the reference count fall to zero, the texture is disposed via .dispose().

However, there are a couple of drawbacks to this approach. First, having to use wrapper objects everywhere instead of the plain three.js objects is a bit cumbersome. Second, it means that my code isn’t very modular or portable - I can’t take my terrain generator or my particle engine and split it out as a separate npm package, because those modules are written to depend on the caching and reference-counting framework.

So my question is, has anyone faced similar issues, and do they have a better approach? 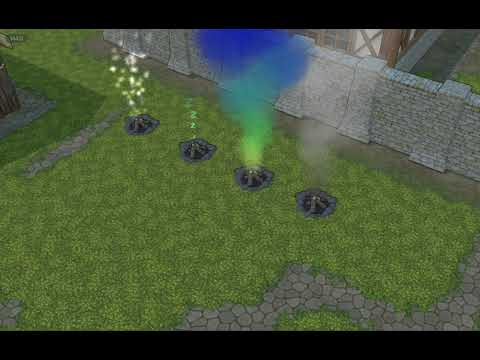 I’ve thought it would be nice to separate out the particle engine as a separate package so that other people could take advantage, but I see no easy way to do this.