for playing around with some web gl rendering i started playing with threeJS a few years ago, but now i will dive a little bit deeper.

So here are my angular template project which i want to share with all of you who also want to play something around with or maybe to built a real app from with it: 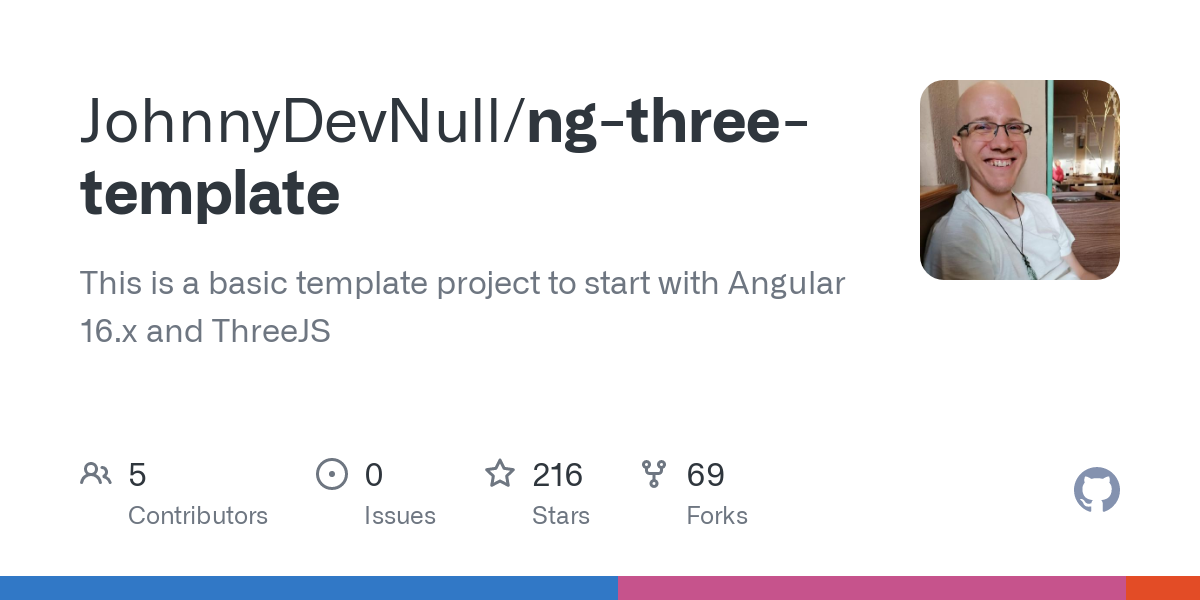 GitHub - JohnnyDevNull/ng-three-template: This is a basic template project to...

The Template have the example code running.

Now fresh updated to Angular 7.2 and ThreeJS 100! Have some fun with it!

What about the Example Modularizations like OrbitControl or LensFlareElement? Are those covered in your template?

They are mentioned in the “Three Links” section in the readme. The package called three-full.

The Template is a basic starter, you can install everything you need via npm.

This is very expensive and you will notice a big performance degradation.

What you need to do is to create a new file in the src folder called ngzone-flags.ts
which you import at the top of your polyfills.ts file.

in this file you should have this:

This will tell zone.js to not hook these events.

To check if it worked you can use the performance panel in chrome and run in for a while, to then check the callstack for each request animate frame.
There should be no call to zone.js in there.

Ps.
It could potentially break other angular libraries that are dependant on these events, so keep that in mind.

They are mentioned in the “Three Links” section in the readme. The package called three-full.

Unfortunately I already did try the three-full npm package and I didn’t get the expected results… Could you explain to me: How would you import the LensFlareElement Class from a (working) Module with the three-full package?

Sorry for my dull questions but I am relatively new to angular and just to mention that I don’t have any clue about webpack, systemjs and what they all are called. I don’t even know how relevant that should be for a beginner. As far as my concern goes, managing to import unsupported modules shouldn’t be a worry at all

Well i think i found a solution for this: https://github.com/Itee/three-full/issues/12#issuecomment-433426345

this could be a example conifg:

then you should be able to import it like this:
import { LensFlareElement } from 'three-full';

Thank your for your reply. I’ve tried your approach and I still get the same is not a constructor error. See the screenshot below:

I am also referring from this Topic:
How do I include THREE.LensFlareElement in Angular Project?

Whereas on the Milestone Page the progressbar indicates 42% complete. So i don’t think that there will be an easy solution in near time for using example based classes, even with third-party libraries or templates.

Anyway I’ll just leave this as a review for the angular template (non-ionic version) and thank you for your time.

What about integration with Physijs? I’ve tried this module everything works fine except for the ammo.js part where I’m getting “something is not a constructor” error

Three 0.111.0 is actually not compatible with TypeScript ~3.5.3 which is the latest Angular Dependency, so if you do a fresh install of my template you have to stay with max version 0.110.0.

Thats the last version i can compile without any errors.

For newer ones you will get the following errors:

We have to wait until Angular update the TypeScript dependency or try it yourself.

…and as a side note: Install @types/webgl2 and add it to the tsconfig.app.json. In my actual template version i’ve done this already. (see also here: Cannot find name 'WebGL2RenderingContext')

Hey, im having angular 8.2.14. I updated typescript to 3.7.4 and included the disableTypeScriptVersionCheck in my tsconfig.json (I dont have a tsconfig.lib.ts?) and added the 2 lines of code to my polyfills. Tho its not working! What am I doing wrong? I really need that to work soon. : (

You could try the 9-rc8 with the options described in the issue or just downgrade your typescript version together with the Three.js Version to the latest working described in my post above.

To solve this issue just add disableTypeScriptVersionCheck under angularCompilerOptions in your tsconfig.json

Allows you to use unsupported version of typescripts without errors. I’m using ts version 3.8

The template is now updated to Angular 9 and working on latest ThreeJs with Typescript 3.7

Thanks! Here is it tested on StackBlitz

There is no reply to this but can I assume that this is now dealt with by “this.ngZone.runOutsideAngular” in the animate() method?
This was pushed shortly after your comment, on 29th Jan 2019:

Am I correct in thinking that the ngDestroy needs to be called to ensure disposal of previous scenes (causing accelerated/faster and faster spinning)?
I have added buttons on this StackBlitz to simulate what happens (in my app it gets triggered in other more intricate reloading events): https://angular-three-template.stackblitz.io/
For example, at the start of the animate() function seems a good place to call it…